The profile page (see link above) outlines the background of our service as well as a few screenshots of what our traffic information website looks like, and I think it complements the list of apps relating to the Highways Agency dataset. 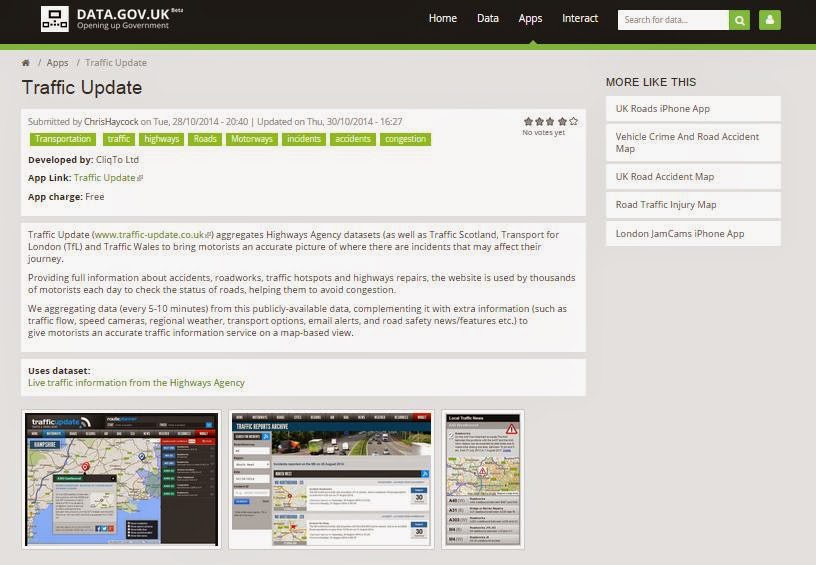 Data derived from the Department for Transport (DfT) datasets show that Northumberland has placed bottom in the list of safest roads in England last year, with 5.98 accidents per 1000 population.

On the other hand, Greater London is statistically the safest county for road users, with just 0.3 accidents per thousand people.

Of course, the data shows that communities living in the top two (which also includes Greater Manchester) ranked counties rely heavily on public transport, which will have some bearing on the final statistics and overall ranking.

The list of top ten safest counties are as follows:

The most dangerous counties (accidents per 1,000 population) in England are as follows:

A more comprehensive analysis can be found at our website: http://www.traffic-update.co.uk/news/northumberland-roads-ranked-most-dangerous/2033/
No comments:
Email ThisBlogThis!Share to TwitterShare to FacebookShare to Pinterest 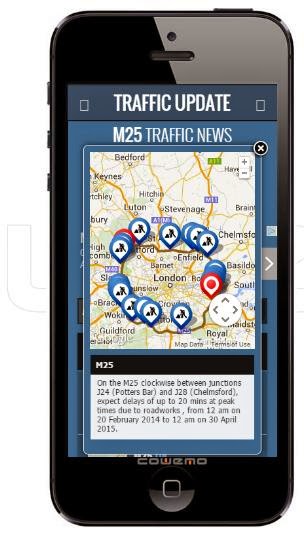 Today we've launched our new mobile-optimised pages, which we hope will improve the user interaction, speed and usefulness of our traffic information service.

From today, all mobile users visiting one of our motorway pages will be served our mobile content, which has been specifically designed for those using iPhones, Android or other smartphones.

As well as giving you a visual map to show you where traffic incidents and hotspots occur, we also provide a feature that allows motorists to locate their geographical position and return traffic problems direct via SMS to their mobile phone - handy when you're on the move.  There is a small charge of £1 (plus standard network charges) to use this service to cover our costs of hosting and providing this traffic information news to your mobile.

In addition, there is an audio report which is useful when you've got your phone in your hands-free cradle.  The voice is a little bit artificial at the moment, but we'll be looking at refining it so it sounds more natural over the coming months, if it proves popular enough.

We will be increasing the coverage of this mobile service to include roads, regions, cities and counties shortly, once we have identified any bugs that may have crept in whilst in development.


No comments:
Email ThisBlogThis!Share to TwitterShare to FacebookShare to Pinterest

Thanks to Beaulieu Parish Council who have just managed to integrate our traffic information service into their website:

Despite a couple of hitches which saw a code conflict, we managed to resolve it and display live traffic conditions on the parish council website.

Located in the south east of the New Forest National Park, Beaulieu Parish is a picturesque village found not far from The Solent, with Southampton, Bournemouth and Portsmouth all within driving distance.

Enjoying plenty of history and heritage, the village is home to the birthplace of many British Royal Navy ships, including some from Nelson's fleet.

Adding the traffic information service to their website will enable tourists, residents and visitors to the village access to live traffic conditions within a 25 mile radius of Beaulieu, and will cover major motorways in the area, including the M27 and M3 motorways.
No comments:
Email ThisBlogThis!Share to TwitterShare to FacebookShare to Pinterest 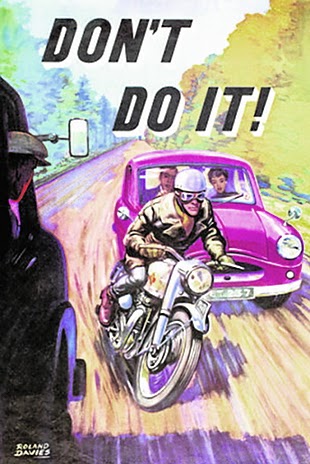 This classic road safety poster was first used in the 1950's to highlight the growing number of motorcycle accidents on Britain's roads.

Published in 1975 by the Royal Society for the Prevention of Accidents (RoSPA), it was widely circulated to help raise awareness of overtaking at speed.

It's very well designed, and still shows how overtaking can result in a 'close call' - or worse - a death on the roads.

Although the number of road traffic accidents has reduced significantly over the last few decades, sadly there are still too many deaths caused by speed - and reckless driving.

All too often we see bikers weaving at speed in and out of cars, taking chances and narrowly avoiding vehicles coming in the opposite direction.

It seems that this poster is still as relevant today as it was almost sixty years ago.

You can get yourself a copy of this poster on the Classic Motorcycle website.  They're printed in full colour, measure 51x75cm and cost just £15.
No comments:
Email ThisBlogThis!Share to TwitterShare to FacebookShare to Pinterest

Every day we come across more and more websites - both in the private and public sector that see the value in what we do here at www.traffic-update.co.uk.

We're very pleased and grateful to the NHS Dumfries & Galloway service for recognising the value we provide to motorists in Scotland and recommending us to their website visitors.

Traffic Update is one of the few online traffic information services that provides traffic news for Scotland. We believe that by identifying us as a reputable source of travel information will help us to continue to demonstrate our commitment to quality, timeliness of information and reputation.

We have Traffic Scotland to thank for supplying the data in a format that allows us to provide live traffic conditions for all counties in Scotland, and enables us to report traffic problems for the whole of the British Isles - England, Scotland and Wales.

A full list of the regions and counties that are covered in our live traffic report can be found at our website - http://www.traffic-update.co.uk/regions/
No comments:
Email ThisBlogThis!Share to TwitterShare to FacebookShare to Pinterest

Looking absolutely stunning in the red, Jaguar has announced that the XE is now available to order before it starts deliveries in May 2015.

The range is likely to put it alongside competitors such as the Audi A4, Mercedes C-Class and BMW 3 Series.

The Jaguar XE S will be available at the time of launch, according to What Car, pulling an impressive 335bph with its 3.0 litre V6 powerhouse engine.  It'll deliver 0-60mph in just 4.9 seconds and offer a top speed of 155mph.  Amazingly, it'll also emit just 194g/km of CO2, averaging 34.9 miles to the gallon, which is impressive stuff.

The XE comes with all sorts on in-car services, allowing drivers to control smartphone services without touching the handset via a touch-based screen.  And you also get your own Wi-Fi hotspot using the antenna.

Which reminds me, my company car is due for renewal around the same time.  Decisions, decisions...!


No comments:
Email ThisBlogThis!Share to TwitterShare to FacebookShare to Pinterest

Walking along the motorway really isn't the done thing, is it, yet that's what police had to deal with when they caught three suspected illegal immigrants walking on the hard shoulder of the M6 in Staffordshire this morning.

The police were surprised to see the three men strolling along literally a few yards from the busy stretch of motorway at 3.30am today near Hilton Services in Cannock.  They were promptly arrested and handed over to the UK Border Agency in Birmingham for questioning.

It was believed that their work visa had expired.  The three men were thought to be from Sudan.

School run offenders to be punished

Good news for child safety - the Government has announced that parents who cause problems when picking up the kids will be banned from parking near schools and issued a £100 fine.

We all know of a handful (luckily the minority) of parents who don't think about the effects of parking badly when dropping off or collecting the children from school. Offenders who cause problems will be targeted with a new order, the Public Spaces Protection Order which will allow councils to clamp down on behaviour that may prove to be "detrimental" to the community.

We don't know what offences will be included yet, but local residents will have a large influence if they complain.

I think it's a great idea. But then again I don't have children at school-age!

Think you're safe from toxic fumes inside your car? Think again.

Research conducted by the Environmental Audit Committee has shown that passengers inside their cars are exposed to 15 times more toxic particles than cyclists and pedestrians.

The research showed that occupants inside cars inhaled a whopping 50 million particles for each breath they took, as opposed to 6 million as a pedestrian.

Worth thinking about when sat in traffic with the engine running.

Drivers are being warned that they could face a fine of £100 and three penalty points if they use the new Apple Watch whilst driving.

The Department for Transport warns that using the £220 watch is illegal, whether drivers use it to read emails, surf the Web or check social media.

In more severe cases drivers caught operating the watch could be fined up to £1000 and a ban.

Nevertheless, at the current time it's legal to use hands-free phones or sat navs, so the law seems sketchy on this one until further clarification is put out.